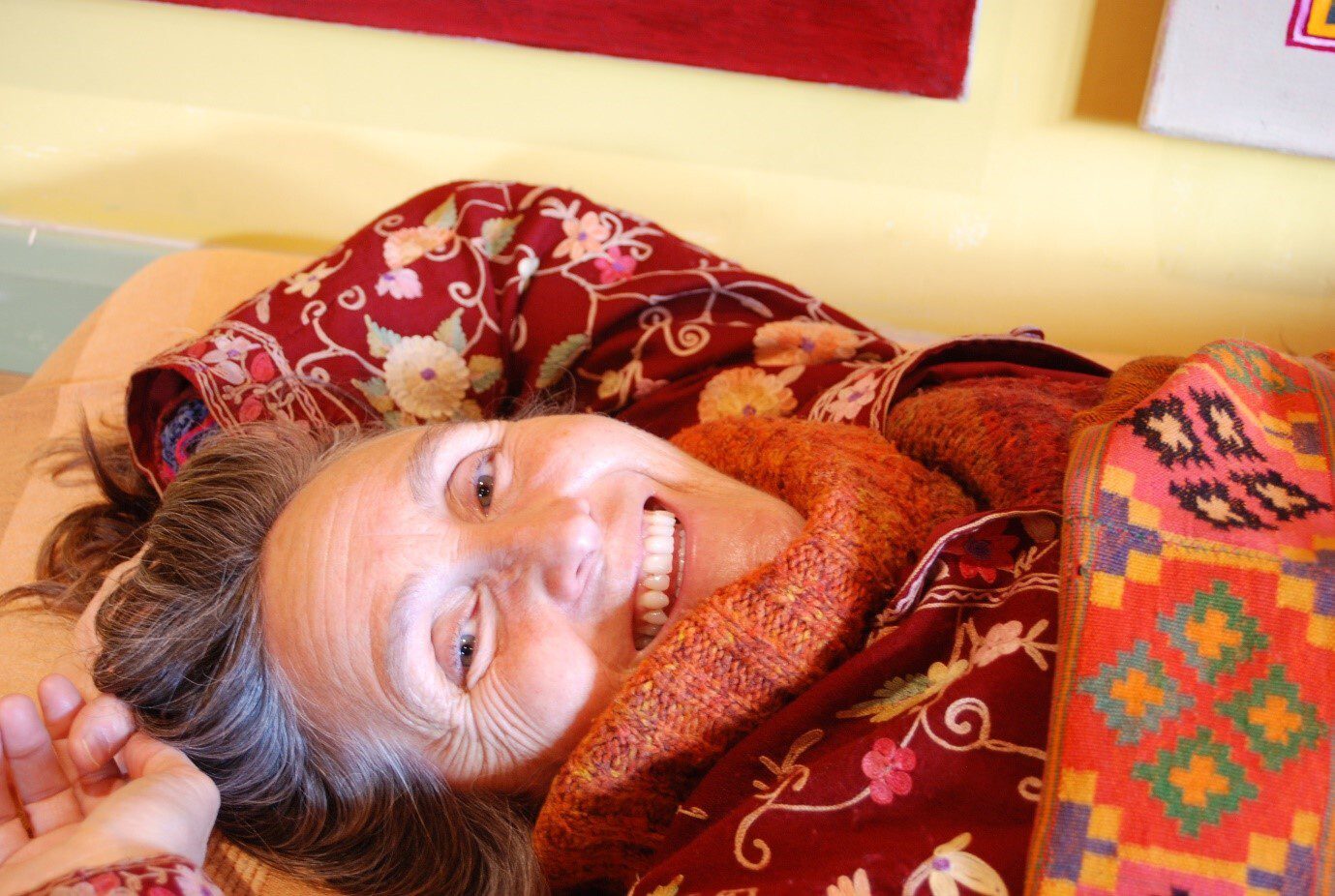 A yoga therapist with special expertise in yoga therapy for women’s health, Uma is a mother of three, and has written four books on yoga for women, including the massive Yoni Shakti, and two books on Yoga Nidra, including Yoga Nidra Made Easy (Hay House 2022) and Nidra Shakti, An Illustrated Encyclopaedia of Yoga Nidra.

Uma is certified as a Yoga Therapist by the International Association of Yoga Therapy. Her diplomas in Yoga Therapy are from the Yoga Biomedical Trust, and the late Mukunda Stiles (Structural and Ayervedic Yoga Therapy). Her initial yoga studies were with Iyengar and Satyananda yoga teachers and her continuing inspiration is the ‘Feminine Unfolding’ asana practice shared by Angela Farmer.

She is co-founder of the Yoga Nidra Network and has developed Total Yoga Nidra, Wild Nidra, Yoni Nidra and Nidra Shakti: radical creative and intuitive approaches to sharing yoga nidra.

Uma’s passion as a writer and as a teacher is to transmit clarity of awareness, creativity and profound vitality. She identifies these teachings as “post-lineage” yoga, rooted in yoga tantra and drawing on a variety of yogic traditions to share deeply nourishing and enlivening practices appropriate for contemporary life.

Her practice and teaching respects the cyclical powers of the living earth, and honours human life cycles as spiritual initiations (including menarche, conscious menstruation, menopause, birth and postnatal recovery).

For poems and seasonal yoga nidrā exclusives head over to

Yoga Nidra 10: In the Yoginis’ Temple
Queen of the Moon – Childrens Nidra
Heart-centred, vivid and nourishing meditations and relaxation practices for the young - a sample track from the album Total Yoga Nidra for Children b...
Rhythmic Yoga Nidra to remind me how to rest
This twelve and a half minute yoga nidra practice by Uma Dinsmore-Tuli is in metrical verse, with a strong hypnotic rhythm. It is one of the yoga nidr...
Kids Review of the Day Nidra
This kids Yoga Nidra was recorded in the afternoon of the one day Yoga Nidra for Kids workshop hosted by Uma Dinsmore-Tuli PhD and Lucy Arnsby-Wils...
Rhythmically Attuned To The Dance Of The Moon
This 26 minute Total Yoga Nidra practice is a gift to support healthy Menstrual rhythms: the key to optimum fertility. It's recorded live during the s...
GIFT Nidra : to nourish every dimension of being
This nidra is offered as a gift to everyone, very especially the members of the International Association of Yoga Therapists, in gratitude for the goo...
Yoni Shakti: New Beginnings
This thirty-eight minute yoga nidra practice honours the vulnerable power of innocence and the tender bright hope that accompanies new beginnings of a...
Yoni Shakti: Cyclical Wisdom
This twenty-six minute yoga nidra invites you to connect with the deep feminine knowing of cyclical wisdom in the form of the seasonal life of the wom...
Yoni Shakti: Bhairavi Self Anointing Ritual
This forty minute yoga nidra was created to dignify and honour the experiences of menopause as a powerful spiritual initiation. The central experience...
Yoni Shakti: Being with Not Knowing
This forty minute yoga nidra practice is intended to provide support as we encounter the inevitability of change. It helps us to be with uncertainty a...
Abundant Life: Pregnancy and Fertility Yoga Nidra
Recorded live beneath a tree in a garden in Amherst, Massachusetts, specially for the Fertility, Pregnancy and Birth online summit with Cathy Ospina (...
Abundant Welcome Atlantic Nidra with Larksong and Ocean
This 19 minute-long Wild Nidra was recorded live on the rocks of Fanore beach, in the Burren, in County Clare on the West Coast of Ireland. It is a s...
Reconnect to source: Four Seasons Breath in the Heart Space
Reconnecting and calming, this 20 minute yoga nidra begins with a home-coming song from Lalleshwari, and settles with an awareness of four seasons...
Welcoming Breath Of Life At Turn Of Winter To Spring (Imbolc Nidra)
This 14 minute nourishing nidra was recorded at Imbolc, on the eve of Saint Brigid's day, live in a beautiful yoga studio in a converted cowshed at ...
By the Stream
This sixteen minute yoga nidra was recorded on an October afternoon by a lively stream, high up in the Heavens' Woods in Stroud, in the Cotswold Hills...
Pot in the Ocean Yoga Nidra
This nineteen minute and 47 second yoga nidra was recorded live in Lesvos on a beautiful May morning. It was specially created to support a connection...
Bilingual English/Russian Welcome Nidra
This 28 minute practice is a warm welcome nidra, recorded live in Moscow, with thirty two Russian yoginis present. The beautiful translation of Engl...
Starlight River Burren Night Wild Nidra
This 18 minute Wild Nidra was recorded by starlight, on my phone by the banks of the Caher river in the Burren in County Clare. It was very dark, clos...
Living Earth Wild Nidra (rooted and enraptured)
This 22 minute practice is a naturally arising experience of 'wild nidra' that occurred at Hawkwood College, in the beautiful Stroud Valleys in the So...
Moon Inside yoga nidra
This 13 minute yoga nidra practice was recorded for the Menstrual Health yoga day in Stroud in July 2014. It invites us to re-connect to the source of...
Inside Sunshine Yoga Nidra (Shining the Light of Consciousness Within)
This is a gentle and awakening 16 minute practice to invite the inner light of consciousness to shine. It is a nidra that is hugely enjoyed when we sh...
English/Russian yoga nidra for women’s health
This is a live recording of a morning practice delivered specially for the yoginis at the Bright family / Birthlight Centre in Moscow. It is the third...
New Mother’s yoga nidra
This track can be found on the Sitaram CD entitled Songs for Yoga Babies & Relaxation for Mums....
Baby bond yoga nidra for pregnancy
This track can be found on the Sitaram CD entitled Yoga Birth....